Order your repeat prescriptions online with your GP surgery.

We provide a full range of HSCB and Private Pharmacy services.

Thousands of pages of health advice from the NHS and Pharmacists covering every topic.

We are now providing a Covid-19 vaccination service. Book an appointment 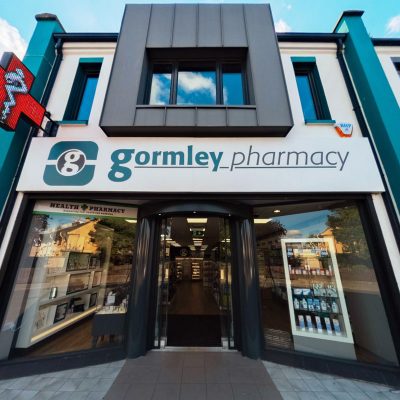 Gormley Pharmacy has been established for over 30 years. We are an award winning independently owned community pharmacy which is family run. Located in Limavady, we provide professional pharmaceutical services which are efficient and customer friendly in a modern retail healthcare environment.

We offer NHS and private dispensing, a stop smoking clinic, weight management service, minor ailments service, a travel health service, flu vaccination service, alongside a full range of over the counter medicines and vitamins. Please call in or telephone if you would like to speak to one of our friendly advisors.

HOW IT ALL BEGAN

Brendan Gormley, followed in his Grandfathers footsteps, and graduated from Robert Gordon University (previously RGIT) as a pharmacist. He had fond childhood memories of visiting his pharmacy in Dunmore County Galway and admired the relationship he had with his patients both young and old. As well as being the local Chemist and Optician, he was also the first port of call in the rural community when the Doctor or Vet were unavailable. His interactions with patients and the example set by his grandfather, Kevin A. Bowman, always struck a chord with Brendan, because he understood that being part of the community was a vital aspect of the pharmacy environment.

After finishing his pre-registration in 1986, Brendan went on to manage O’Brien’s Pharmacy in Limavady. When the opportunity arose to purchase the business in 1989, Gormley Pharmacy was established, in a new purpose built premises on the current site at Irish Green Street. Since then a lot has happened, two refits of the shop the most recent being in 2019 which included a rebrand of colours as well a state of the art Dispensing Robot. And as tradition would have it, Brendans son, Mark Gormley, joined the business as a pharmacist in 2019.

Being recognised as the first point of contact for healthcare advice or signposting patients to other services is the core strength of community pharmacy. This has been a valued aspect of our profession and here at Gormley Pharmacy, we are driven by delivering the best possible outcomes for our patients.

Gormley Pharmacy have 100 Moderna  vaccines available for first dose vaccination to anyone aged over 18.

Several clinics will run during August it’s first come, first served so please click on this link to book an appointment!